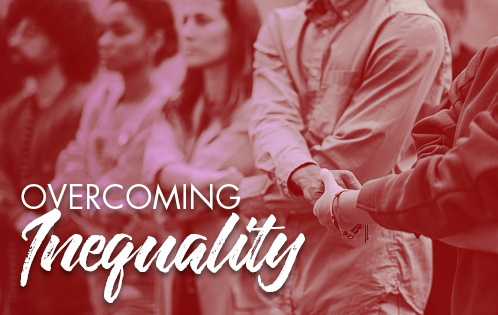 We all matter, and no person has greater value than another regardless of their background, outward appearance, job, or strength. We all have a human responsibility to work together without rejecting characteristics different from our own because we are all part of God’s family. We truly need one another and can’t afford to act or exist in isolation. While there are many races and nationalities across the globe, in all actuality there is one race—the human race. The enemy creates the division that we see taking place in the world today, but we must understand that the human race is a body that has many parts. No matter how many parts are named on a body, it’s still one body. For example, the foot could be considered as a different “race” from the arm race, knee race, or head race, but they are still all part of the same body.

The body of Christ operates in the exact same manner. Before we became Christians, we each used to call our own shots independently; but when we became saved, we became part of a larger, integrated body in which Jesus has the final say. Each of us is now part of His resurrected body, refreshed and sustained at one fountain—His Spirit—where we all come to drink. The old labels that were once used to identify people are no longer useful because all parts of His body are significant (1 Corinthians 12:12-18, MSG). Each part of the body has different functions and perspectives, but each is designed to function perfectly for the overall purpose and assignment of the whole.

Every intricate part is important, and no single part should allow differences to be blown up for the purposes of self-importance or superior attitudes. Some people think more highly than they should, believing they’re more important and that they can treat those who are different in a lesser way and with no regard. The Word of God says that’s wrong. That attitude opens the door to sin, prejudice, and the prejudgment of others. We must understand that our personal significance is based on us being connected to one another—the human race—and the body of Christ. We are not significant based on our gender, class, the color of our skin, or any other characteristic.

When Jesus came, people thought He was crazy because He was willing to have conversations with people they thought did not matter. “Jesus, why are You talking with this Samaritan?” “Why are You healing this blind man?” “Why are You doing all these things?” Because, in God’s plan, they mattered. They were necessary for Jesus to carry out what God called Him to do. The key word is dignity. Jesus came and gave dignity to everyone. The apostle Paul had a revelation of the dignity that all of creation should experience. It’s not based on your skin color that you deserve respect, dignity, value, or honor. Because you are part of humankind, because you are part of the human race, you have dignity. Paul’s revelation of the difference between the old and new covenants demonstrated that all are able to be profitable and part of the body of Christ.

Let’s decide today to embrace and celebrate our differences, knowing that we are contributing to the same body. We can renounce and resist the spirits of superiority, racism, and inequality. Our Father can help us see one another as He does, to feel as He feels, and love as He loves. We are Christ’s ambassadors and, when we embrace each other, we can renounce inequality and work together to become the hands and feet of Christ.